This article explains the world map part of the Solidarity Park monument not just what it signifies but also the technical details of how it is made.

The idea of the world map is simple in one way, that it represents the Internationalist nature of the brigades that came from every corner of the world to fight in Spanish civil war,  but this is not the only meaning.

The main monument of the ship and stone Brigadistas sits on top of this world map. The map itself has a small inclination. These were  purposeful designs. Many of the early designs of the monument the ship was sinking but those ideas were rejected as negative. This ship sits on top of the world. They are shown as heros and triumphant. As an artist which way to explain the events this was not a straightforward thing.

To balance this view the opposite story was told in the Installation Brigadistas Return shown at an exhibition in 2018 (here is a video link). In this Installation there are 30 of the stone figures set as they will be in the monument but this time the art work shows a more desperate plight of sinking if still defiant.

The stone chosen for the world map is a hard red sandstone. Red stone was also chosen purposely.  These men had not just come to defend a republic against a fascist coup. They had come to change the world, to turn it red, to turn it socialist. Red is the color of socialism because it represents the blood of the working class.  The Brigadistas understood that this fight was the same fight in their own countries. Whilst the world today is not socialist, the red of the map shows the ambition and dreams of the Brigadistas.

The world map for Solidarity Park is made in stone and cut by hand and therefore posed some challenges.

There were other options of materials and designs for the world map. After Rob the design artist had developed a basic idea Jordi the architect helped focus the ideas in many discussions in bars. In the end using materials such as concrete and metal were rejected in favor of an all stone world map.

The first task then was to set out the map shape within the slabs of paving. Here the size of each slab was a big consideration financially and practically but most importantly aesthetically. It was important that the world map visually fits the context of the whole monument  allowing its political message to be assimilated within a vision that people expected. At times with art you challenge expectations and sometimes you conform to them to allow for other parts to shine. While wanting to look a little futuristic the idea of the world map was to do a job.That job is to look like a world map.

Making the joints between stone slabs work with the shape of the world and the longitude and latitude lines was difficult  and took some time to decide. In addition, live on site when I fill the map I will cut up the sea pieces to create a wave effect.

All the time while considering the design it was necessary to have an eye how it could be done within resources. Reality is the mother of invention, occasionally though in art as in life you have to jump blind and trust your instinct to solve problems as they arrive.

Mistakes were made for example the first land mass to be made was Australia and the visual grain ran the wrong way –  up down not left right –  this was an aesthetic error and means doing Australia again. Sedimentary stone grain is formed in horizontal layers in ground, the case of the Australian slab it was just cut out wrong. The grain  for the stone brigadistas is more critical and not visual at all and could only be checked with the quarry. If the grain in these was wrong then the weathering of the Brigadisats will be noticeable over decades. 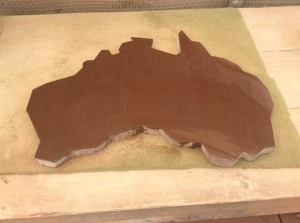 Which world map projection to use was also important. In the end a more  Mercator type projection was used over a Peters projection. In this case a compromise of aesthetic norm over geographical and  political accuracy was made. We won’t know if this was the correct choice until the finished work. Apologies to Africa and India particularly in the template stage I tried to stretch you to your rightful place but not good enough. Greenland was also greatly reduced from its original design size.  These counties all fared better than New Zealand which was forgotten for months and will be crammed in at the last minute..

Once the design of the world map was made it was printed on 3 sheets of paper 1 meter by 5 meters long then fixed together and laid on a clean level surface. Then on top was placed thin rolls of  plastic of similar size to the paper. The map was then copied on to this plastic with a permanent marker pen. This plastic was for reference. On top of this was put another plastic sheet, marked on it was the same world map and joint lines. This second role of plastic was then cut out into individual plastic templates for the landmass and for the sea.

The  stone representing the sea was cut out and then laid out.  The reference plastic sheet  was used to give a basic indication of the position of the land mass. The landmass stone was placed in position and then a scribe line was marked. Then the jigsaw was fitted together very slowly. This stone is now going to be treated and polished and packed up ready of fitting. I look forward to seeing it in reality.

The political and artistic considerations should be understood as a whole with in the process of the design. The porthole window are being designed by students. There will be 2 added to the monument when it is first built and then one every year after that up to 12 in total. https://solidaritypark.com/2019/01/28/community-portholes/

The 60 Brigadista figures that that sit on top of the monument. Were partly carved in the streets with the participation of over 650 people over a 2 year period. The were also made by myself alone in the workshop. The process of this can be seen on a series of videos on the Solidarity Park Youtube channel. Making the Brigadistas.

For me the process is everything, So I hope this article gives you some insight to how the monument has been made. 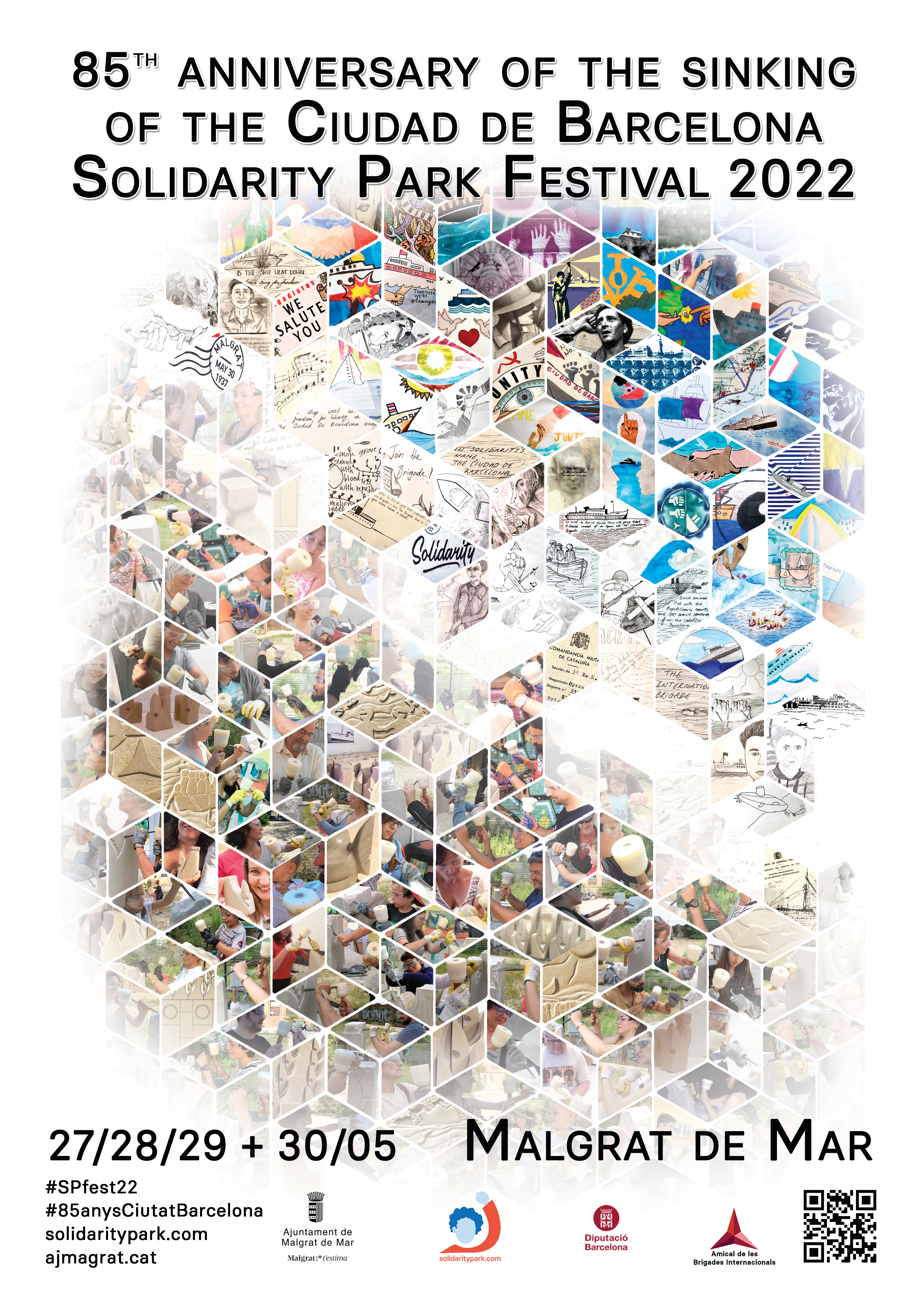